Because Mac OS X ships with the Jar Launcher application, the end user needs only double click on the jar file and the application will launch. To make the jar file executable, the manifest must include the name of the Main class file. Unjar JavaSoundDemo.jar with the command jar xvj JavaSoundDemo.jar. Free java 1.7 updates download software at UpdateStar - Java Platform, Standard Edition (Java SE) lets you develop and deploy Java applications on desktops and servers, as well as in today's demanding embedded environments.

These documentation pages are no longer current. They remain available for archival purposes. Please visit https://docs.oracle.com/javase for the most up-to-date documentation.

This page shows you, step by step, how to convert a simple Java application to a version you can distribute on a Mac. To follow along, download the ButtonDemo (.zip) example from the Java Tutorial. This example was created using NetBeans which uses the Ant utility. You can run all necessary tools and make all necessary edits from the command line, without launching NetBeans. The Ant tool is required.

You have created a Java application and want to bundle it for deployment. This requires the following steps: 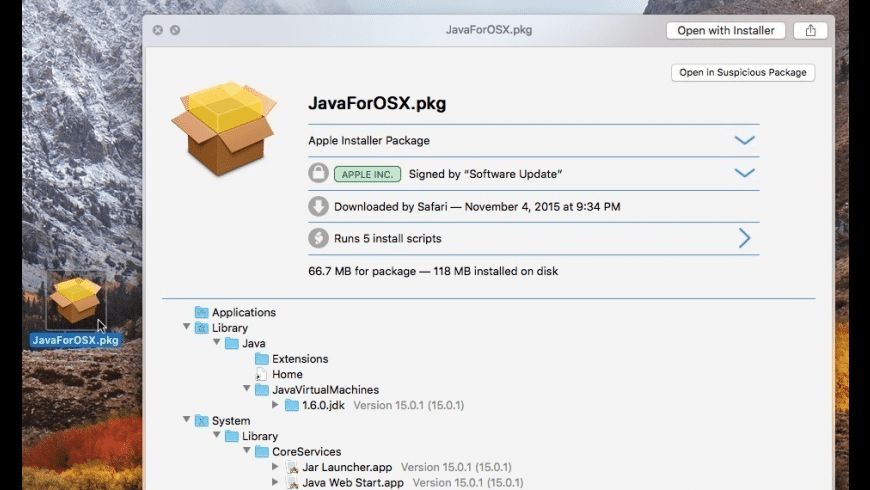 This step creates the ButtonDemo.jar file.

Execute ant jar in the high-level project directory to create the dist/ButtonDemo.jar file. This jar file is used to create the .app package.

Bundle the JAR File into an App Package

To create the ButtonDemo.app package, use the appbundler tool. The appbundler is not shipped with the 7u6 version of the Oracle JDK for the Mac. You can download it from the Java Application Bundler project on java.net. There is also AppBundler Documentation available.

As of this writing, the most recent version is appbundler-1.0.jar, which is used by this document. Download the latest version available and substitute the file name accordingly.

Bundle the JRE with the App Package

In order to distribute a Java application, you want to avoid dependencies on third party software. Your app package should include the Java Runtime Environment, or JRE. In fact, the Apple Store requires the use of an embedded JRE as a prerequisite for Mac App Store distribution. The runtime sub-element of the <bundleapp> task specifies the root of the JRE that will be included in the app package.

In this example, the location of the JRE is defined using the JAVA_HOME environment variable. However, you might choose to bundle a JRE that is not the same as the one you are using for development. For example you might be developing on 7u6, but you need to bundle the app with 7u4. You will define runtime accordingly.

Since this example defines the runtime sub-element using JAVA_HOME, make sure it is configured correctly for your environment. For example, in your .bashrc file, define JAVA_HOME as follows:

Use the following steps to modify the build.xml file at the top of the project directory: 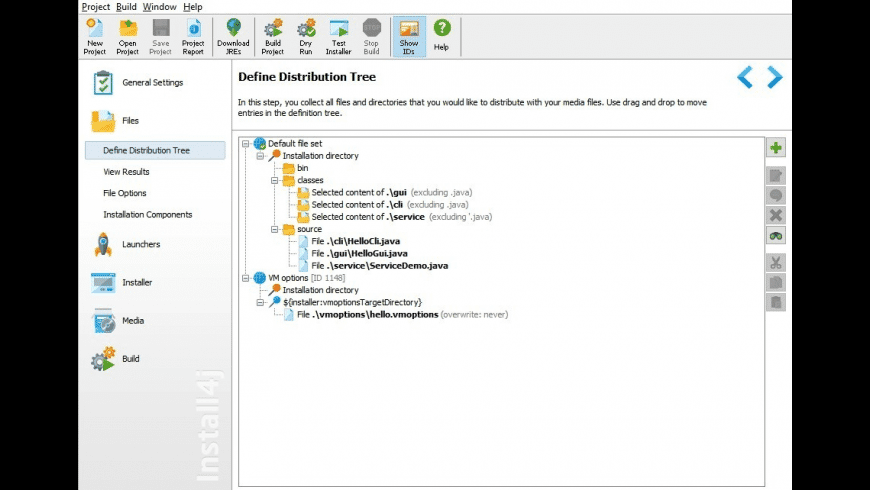 The resulting build.xml file should look like the following. (The new lines are shown in bold.)

Create a fresh version of ButtonDemo.app, using the ant bundle-buttonDemo command. The resulting version includes the JRE in the app package. You can confirm this by examining the Contents/PlugIns directory inside of the app package.

The Gatekeeper feature, introduced in Mountain Lion (OS X 10.8), allows users to set the level of security for downloaded applications. By default, Gatekeeper is set to allow only OS X App Store and Developer ID signed applications. Unless your app is signed with a Developer ID certificate provided by Apple, your application will not launch on a system with Gatekeeper's default settings.

For information on the signing certificates available, see Code Signing Tasks on developer.apple.com.

The signing certificate contains a field called Common Name. Use the string from the Common Name field to sign your application.

Sign your app using the codesign(1) tool, as shown in the following example:

To verify that the app is signed, the following command provides information about the signing status of the app:

To check whether an application can be launched when Gatekeeper is enabled, use the spctl command:

If you leave off the --verbose tag, and it does not print any output, indicates 'success'.

For more information, see Distributing Outside the Mac App Store on developer.apple.com.

Submitting an App to the Mac App Store

You will need to create an application ID and then obtain a distribution certificate for that application ID. Submit your app using Application Loader. For more information, see the following links (on developer.apple.com):

The Scope Report is a Java program that uses Jamf Pro API calls to collect and organize specific information about how everything is scoped in your Jamf Pro environment. It can be run from any computer that can access Jamf Pro from their web browser and any user with at least read permission. It makes the .csv file inside the folder it was run in so it is easy to import wherever desired.

The need it is fulfilling: 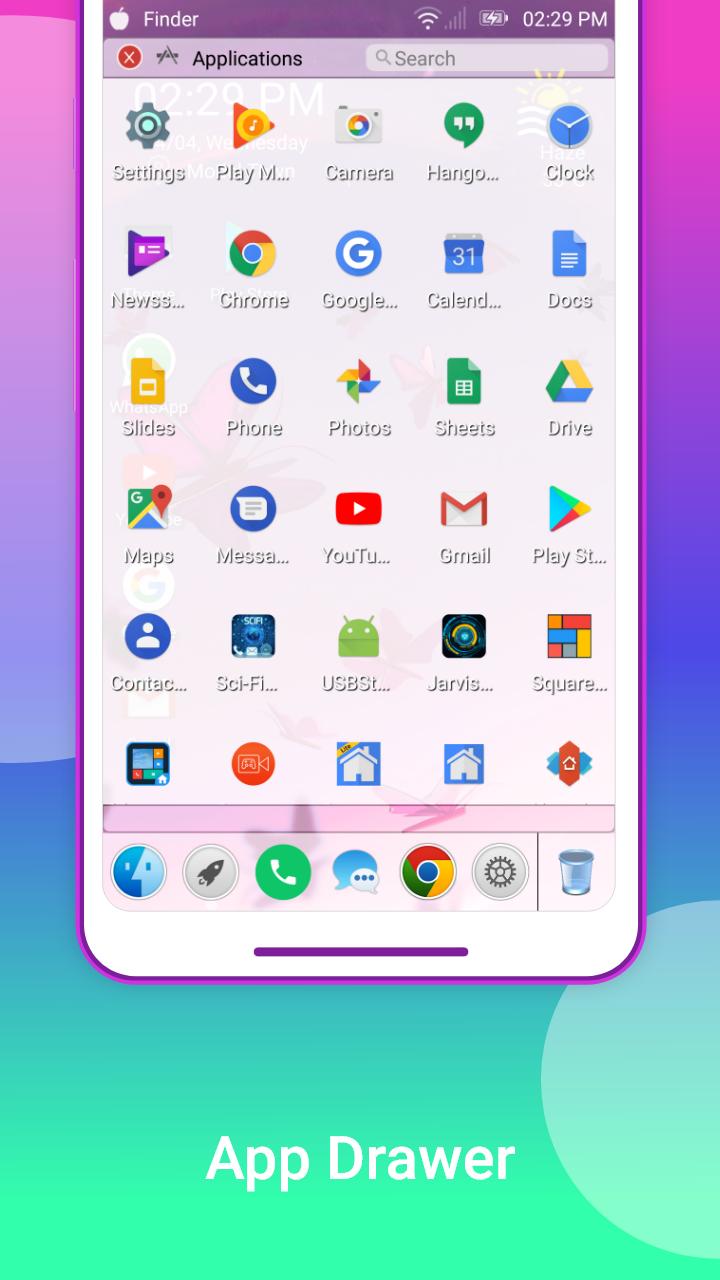 NEW: No Java needed if you use the Mac App

NEW: ERROR HANDLING! It will now tell you when you have the URL or the username/password incorrect. If you see the “Please file an issue error” please feel free to file an issue. Including the search you were performing and any data for recreation would be helpful in figuring out a fix.

NEW: Show what Apps, Ebooks, and Mobile Profiles are scoped to which User Groups(Does not show LDAP users, limitations or exclusions, this can be added if requested. Does not work for MacOS Profiles and Policies due to a lack of an API endpoint, details in the warning.)

Warning!! The API endpoint for MacOS (computer) policies and profiles does not report user groups limitatons and exclusions properly. The only search that works for user’s scoped searches is for MacOS profiles and for Mac Apps, it does not work for users scoped to policies and only pulls one user group for profiles. A product issue has been filed and if the endpoint is fixed this program will be updated. As a side note all iOS (mobile) searches work great!

Note: Any Device group search takes a bit of time and a straight scope report is a lot quicker. On my test cloud instance, the Group Searches take about a 1 minute each. In larger environments it could take a while. It is a steady stream of (non-concurrent) API calls that can vary in size for data returned, however the largest data stream return I have seen is 1 MB. Which should be very manageable in most environments. The ability to search only specific device group names would break up calls for larger environments if needed. So let me know!

Running directly on the same server as Jamf Pro would decrease network traffic and would already have all the Java needed.

NEW: No Java needed if you use the Mac APP

EXAMPLE: java -jar ‘/home/jamfuser/TheScopeReport/dist/TheScopeReport.jar’….Has not been tested much in linux, however if you have the most recent versions of the JRE and JDK then it should run fine. It does not launch correctly if you double click (without a jar launcher) on it. It needs to be run using java -jar from terminal. It does require a GUI.

The different versions are for ease of launching outside of using the standalone app. They are all the same if you go to /dist and use java -jar or a Jar Launcher to run the .jar

If the demand is there this could easily be converted to a gui-less app. So, let me know!

Any suggestions or ideas for functionality are welcomed!

Since the output is .CSV we can open the file produced in a text editor or in Excel (recommended). It does look better in Excel. It does not size the columns unless imported into Excel. If you do not want to manually adjust the columns size then one option is to use the method shown on this site: Import .csv guide